Australian soils are degraded, from levels of 8% and more of carbon, much of our soil has have less than 1%. Healthy soils need carbon. Carbon in the soil means there is life in the soil and structure that provides oxygen and holds water. The life in the soil, the microorganisms provide plants with the nutrients they need.

The power of photosynthesis, and the small water cycle, offer a practical solution to the need to draw carbon from the atmosphere and store it in the soil. And cool the planet.

In 2018 scientists across a vast field of expertise got together to list and analyze solutions for climate change that could be implemented now. Each solution was costed to consider the implementation of the solution, benefits and amount of CO2 equivalent (CO2e) the technology could bring. (Drawdown, the most comprehensive ever plan proposed to reverse global warming. edited by Paul Hawken.) Among the solutions, Regenerative Agriculture is ranked number 11 in the overall effectiveness of the solutions available that can drawdown CO2—stating that
“no other mechanism known to humankind is as effective in addressing global warming as capturing carbon dioxide from the air through photosynthesis and storing it in the soil.”

As the plant photosynthesises, not only does it transform the CO2, and water into carbohydrates as energy, it also transpires water vapour. Every gram of water converted from liquid to vapor takes up 590 calories of heat. This is the most effective and safe way of cooling the planet.

The soils’ ability to hold water is crucial to the effectiveness of the small water cycle. As the soil dries out from intensive agriculture and the loss of soil carbon, the landscape becomes drier, and loses trees and perennial grasses, particularly where heavily grazed. As the soil holds less water the plant’s capacity to photosynthesize is reduced. 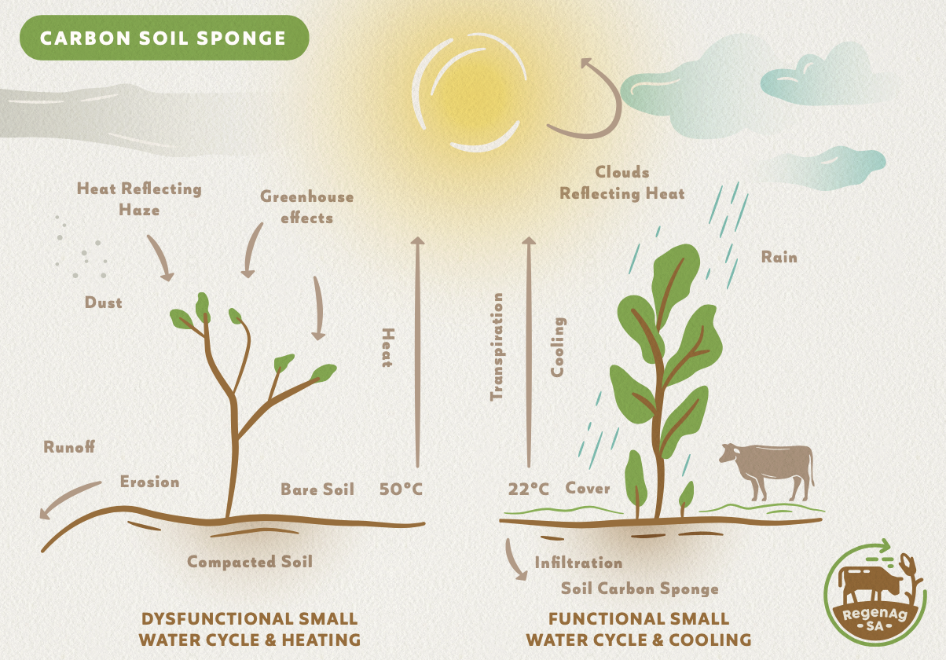 The potential to drawdown carbon
Close to 60% of Australian land has an agricultural purpose. While much of this land is arid or semi-arid, there is still the opportunity to increase the carbon within the soil. The loss of perennial grasses that covered much of Western Australia (their long root systems keep the soil covered and healthy) is a tragedy and has changed the landscape.

There are many academic studies on the sequestration of carbon in the soil, with results varying on the assumptions and land controls used. However, what is really important is that there are many farmers who have and are now actually building carbon in their soil and improving their landscapes every day. Many of these farmers have been documenting the changes they see and experience, including measurements of the carbon in their soil over several years, the cover of perennial grasses, and also documenting farm outcomes such as yield, quality and cost of inputs including their production over drought years and flooding events. Their stories are inspiring and heartening.

Visit the soil to view these stories

One solution to the problem of too much CO2 in the atmosphere is to pay farmers for the CO2e, they sequester in the soil or for the improvements they make to the landscape.
Farmers and pastoralists are at the mercy of variable climate, economic and conditions with less certainty of rainfall, seasons, input costs, and the end prices set for their products. Facing high risk and little certainty favours short term decisions that enable them to just stay in business. The average farmer income in Australia is below the average wage and has been declining over the years. The high number of farmers leaving the sector has little to do with their business skills but the uncertainty in a difficult market.

Paying farmers to manage the land and their business with a longer-term view to soil health and productivity rather than of necessity short term economics would enable the land manager time to transition to the practices that support building healthy soil. It would benefit the land manager and our food production

Farmers and pastoralists must be enabled to be part of the solution to agriculture and climate change.
One solution that is gaining traction overseas is some large companies are paying farmers for the carbon they sequester in the soil. Australia has been operating a Carbon Emissions Reduction Fund, where the Carbon Farming Initiative, enables landowners to earn credits for each tonne of CO2e stored. So far, it has had limited uptake by the farmers due to the complicated paperwork, expensive measuring requirements, time frame constraints and the meagre price paid by the Australian government with only $17 per tonne of sequestered carbon compared to more than $50 per tonne in Europe.

However it is one solution to reducing CO2 in the atmosphere that is seen by Government and farmers as worth further work.

Estimates on the potential drawdown of C02 vary and there are many scientists who have made calculations. Two predictions come from the esteemed Australian scientist and farming advisor Dr Christine Jones and the former President of the International Union of Soil Scientists, Professor Rattan Lal. Dr Christine Jones has calculated that 5-20 tonnes of C02 can be sequestered in the soil, per hectare each year, (within some landscape provisions). Dr Rattan Lal says that restoring soils of degraded and desertified ecosystems can store an additional 1-3 billion tonnes of carbon per annum in the world’s soils, which is roughly equivalent to 3.5-11 billion tonnes of CO2 emissions. There are many estimates and a similar number of detractors. It’s a difficult calculation.

---- Carbon in the soil is a good thing. It boosts biological activity and nutrients to plants and improves water infiltration and storage.   ---- One tonnne of stored carbon in the soil removes 3.7 tonnes of carbon dioxide from the atmosphere.   ---- Each additional 1% increase in soil carbon per hectare, can result in an additional 168,000 litres of water stored in the soil.   ---- Innovative farmers across the world are using practices that build soil health and are witnessing transformations in productivity and biodiversity.   ---- Carbon is the driver for every aspect of soil health and function. — Australian Soil Scientist Dr Christine Jones